Play, prank, spy and command! Speak through him or put him into stealth mode to be your undercover agent! MiBro is full of smart-talking phrases and sounds! Play with his range of awesome accessories so you can practice your skills, blast away your enemies or use him to get you things! Mibro, your robot partner in the fun!

You can even use MiBro’s tray to carry your smartphone! the tray also transforms into a goal and can be used to score the winning goal with the included ball. Celebrate with a victory lap using mibro’s mini over-sized foam finger. He’ll impress your friends, he’ll save that day.

Talk through MiBro and be the Bot

MiBro isn’t just a robot you watch, he’s a robot that’s totally under your control. Imagine the looks on your friend’s faces when they hear MiBro speak to them! Using his Really RAD Remote, your voice will come out MiBro – simply drive him up to someone and communicate with them from a distance.

The trick, Prank and Surprise Your Friends

MiBro is your perfect partner in pranking! He is loaded with silly sound effects and noises so you can prank, scare or just make your friends laugh! MiBro will keep you entertained with his smart talking phrases and different Sound Effect Modes! You can gross it up using MiBro’s Gross Sound Effects, sneak up behind your dad and make MiBro let off a fart: ‘Dad was that you!?’. Or use the Blaster and Laser Sound Effects with MiBro’s blaster and let the battle begin.

Go On a Spy Mission

Get sneaky and use MiBro’s “Stealth Mode” so he can spy and listen for you! Drive him quietly into a room like an undercover agent and listen as his microphone picks up sounds nearby and transmits them through his Really RAD Remote! Listen to your brother’s or sister’s conversations and hear their secrets – MiBro is the perfect silent friend to help you gather valuable information. MiBro’s got your back on any spy mission.

MiBro Can Be Your Robotic Butler

Your wish is his command – MiBro is always at your service (and he never complains)! You can have him fetch any lightweight items. Simply rotate MiBro’s arms upwards, slide the tray into his hands and place the item on the tray. Now your cell phone or favorite crisps are never too far away! Note: MiBro can carry up to 400g or 0.8lbs.

Show Off Your Ball Skills or Play Against Your Friends

With MiBro’s Ball and Goal you can show off your skills on the sports field! Place the Tray upright to use it as a Goal and challenge your friends to a ‘Goal off’. You can even play against a friend who has a MiBro and has your very own Robotic World Cup! Plus with the Sports Mode Sound Effects, you can celebrate every epic goal with RAD cheering! Olay Olay Olay! 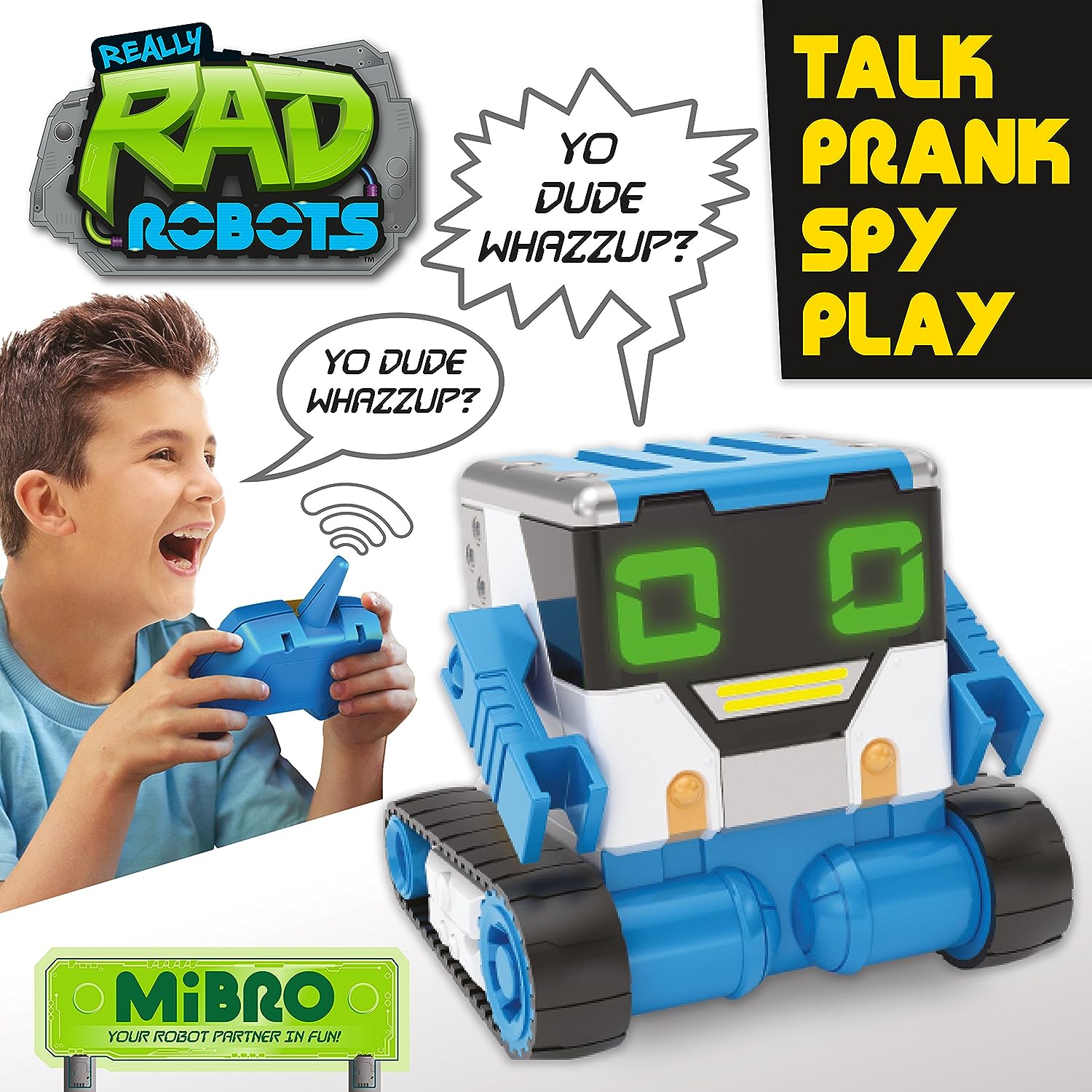